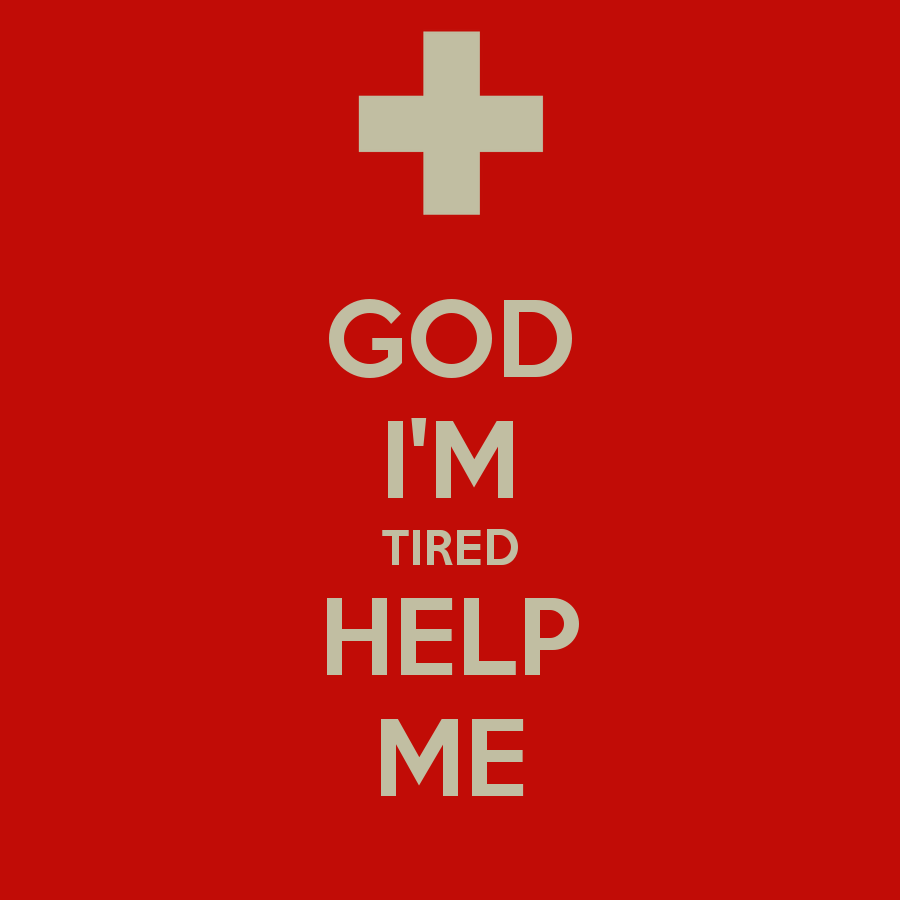 Sometimes you have those days where you just don't feel good. It's not just a matter of you not feeling well physically but you also feel spiritually empty and tired. Tired...almost like you have nothing left to give yet you know that you can't tap out. You try so hard to keep on going but you don't want to keep going on like this. Pretending. Hurting. Angry. Frustrated. Empty...

"You've brought me to the end of myself and this has been the longest road. Just when my hallelujah was tired, You gave me a new song."

You're tired. You're so tired of hitting that hard brick wall every single time that you try to go forward. You're tired of the setbacks, tired of the fall throughs, tired of trying and feeling like it's not good enough. You just want it to be different this time. You want to let go and fully let go this time yet it always seems to remain clenched so tightly in your hand.

You feel as though you don't know where to go from here. You want it to be different this time but deep down inside you're scared that it will only remain the same. That little voice inside tells you that you won't come out of this, you will continue to stumble, it will only last a week or so and then you'll go back to the same old same old. Those lies begin to get LOUDER than the word of God that says otherwise. You feel defeated. You believed for a moment that it would be easier to give up than to get through this. You considered throwing in the towel but something inside of you tells that there's still something worth fighting for. Something has told you, maybe even faintly, that you can't give up. I know this because you chose to read this.

"I confess I still get scared sometimes but perfect love comes rushing. And all the lies that screamed inside go silent the moment You begin."

I know that life can happen sometimes and the unexpectedness of it all can bring you to your knees. No matter how strong you are in your faith, you will face some days where the opportunity to give up will present itself in such a way that it almost convinces you that it would be easier than pushing forward. Can I be that soft whisper for you today? You can't give up friend and the reason you can't give up is because what is on the inside of you is worth fighting for. Please realize that if there was nothing in you or about you that was worth fighting for satan would not be working overtime to get you to break! He is fighting you so hard because he realizes that there is something so great on the inside of you that he does not want to come out.

"You remind me of things forgotten. You unwind me until I'm totally undone. And with Your arms around me fear was no match for Your love and now You've won me."

Can I remind you of something? Did you forget what 1 Corinthians 15:57-58 says? Well here’s a quick refresher: “But thanks be to God, which giveth us the victory through our Lord Jesus Christ. Therefore, my beloved brethren, be ye steadfast, unmovable, always abounding in the work of the Lord, forasmuch as ye know that your labour is not in vain in the Lord.” Victory already belongs to you because of who you are in Christ. Have you forgotten this fact simply because you're facing things that are making you feel less than victorious right now? No one and nothing can take away the fact that you are victorious in Christ except for you. Don't you get it? Satan wants you to knock yourself out of a race that you've already won! He can't take victory from you because it's already yours through Christ Jesus, so instead he tries to get you to give it to him by giving up. Don't you dare give in and give up on what is rightfully yours.

While you are sitting here looking at the very things that are trying to take you out and thinking that it is so hard, the enemy is looking in the future and he is scared because he sees who God has predestined you to be! He sees you walking in boldness; he sees you whole in Christ; he sees the overcomer that was on the inside of you now walking boldly on the outside; he sees the less frustrated peaceful you; he sees the confident you; he sees the souled out for Christ you; he sees you walking in your anointing; he sees you impacting and changing people's lives; he sees you pleading the blood of Jesus and breaking generational curses; he sees the best part of you....that you can't even see in yourself right now and that's why he wants you to give up. Satan isn't attacking you because you're an easy target. He's not distracting you because he sees you don't have purpose or that you're going to be defeated. He's not fighting you because you're a lost cause. Quite the contrary! He knows that your current state is not your final destination. What he also knows is that if he can get you to believe the lies while you’re feeling defeated, feeling like you lack purpose, and feeling like a loss cause, that you will abandon the very thing that is on the inside of you. You will forfeit your purpose and Gods plans for your life. Satan wants you to focus on where you are and not where Gods will is for you to be. Don't allow your current circumstances and frustrations to lead you to make rash decisions that will impact your purpose and destination with God.

"If I lived a thousand lifetimes and wrote a song for everyday, still there would be no way to say how You have loved me."

You say “God I'm tired.” God says, My grace is sufficient for you. I will carry you through this. The enemy wants to steal what God has planted on the inside of you and the only way he can get it is if you give it to him. I hope and pray that you realize that even though you may feel tired, what is on the inside of you is still worth fighting for.